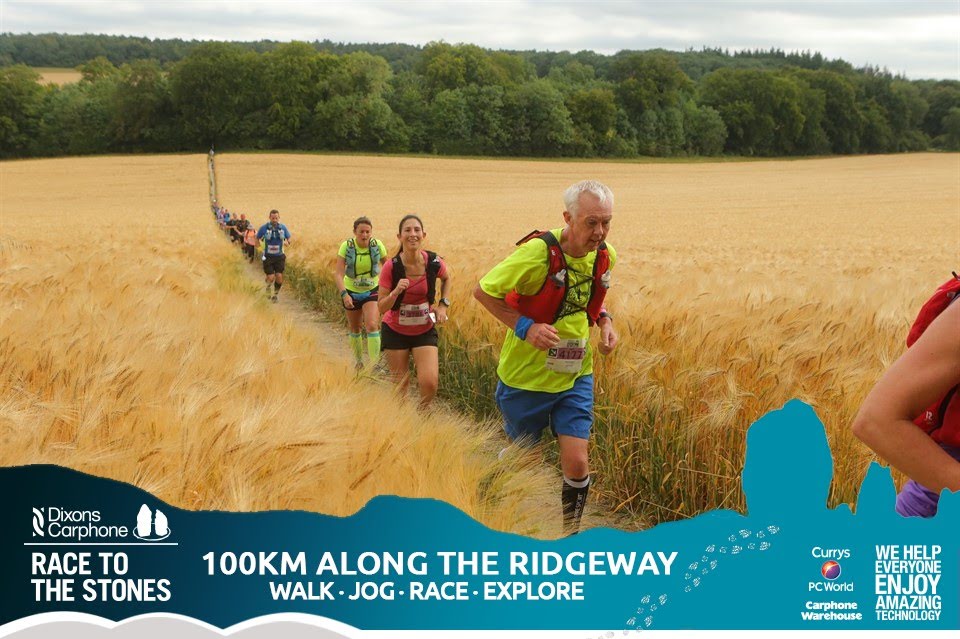 The race starts near Lewknor, Oxfordshire, and follows the ancient Ridgeway National Trail, finishing at Avebury Stone Circle, near Swindon. There were 1102 runners.

The RTTS is very well-organised with excellent direction signs.

If you are new to the concept of an Ultra-Marathon, as most of us were, this one has a couple of features you probably haven’t come across before.

The familiar water stations of shorter races are replaced by Pit Stops. These tend to be about 10 km apart and are more than watering points. Typically there would be water, fruit juices, tea and coffee, energy bars and gels, electrolytes, bananas, water melon, fruit and sandwiches. All stops had crisps and chocolate and a variety of nut bars. Later stops had porridge. 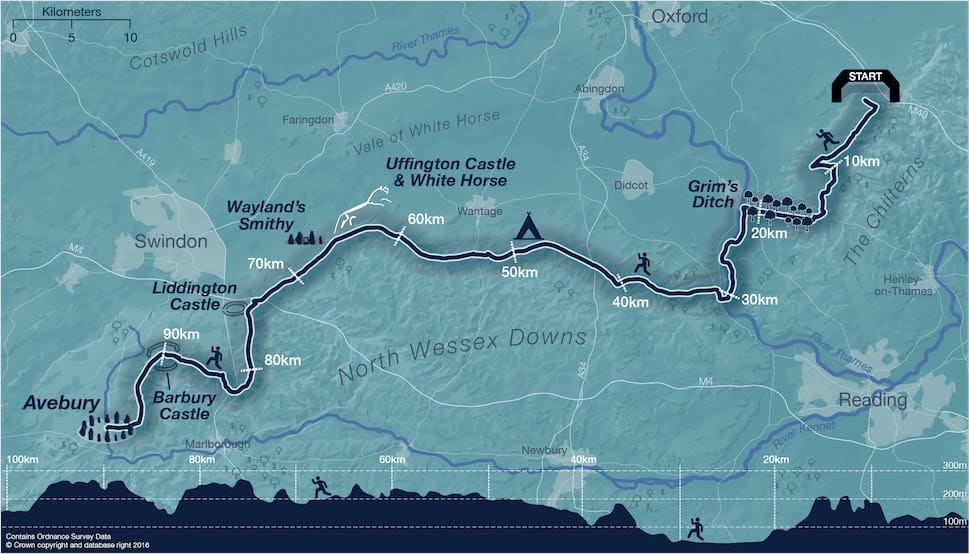 At 50 km there is Base Camp. This is a mega Pit Stop which had all the camping facilities, and food marques serving soups and hot meals. In addition to all this free grub there were stalls and vans selling ice-cream, burgers and pizza.

All pits stops had a medical tent and, of course, toilets which were clean with no queues.

There are Cut-Off times for the various pit stops but they were so generous they were never a concern.

There are shuttle buses to get you back to your car at the Start from both the Base Camp and the 100 km Finish at Avebury.

The scenery is amazing. The terrain is hilly and many of the tracks have trip hazards such as tree roots, and flints and stones protruding from the ground. Others are narrow or overgrown, many with hidden ruts.

Ai Seng, Naresh and I ran the 100 km in just under 18 hours, guided and encouraged by Shaolin who is fast becoming an Ultra veteran. Her ever-watchful eye and patient back-marking meant that any inevitable low points or problems we encountered were short-lived.

Devkee and Arjun provided typical ERC encouragement and support by cheering us into pit stops until well over half way. Lynn, having delivered 3 of us to the start, gave us rapturous applause as we finished at 2 am, poured us into the car and got us all home just after dawn.

I use the word “ran” as a general expression. The many hills and rough terrain meant that walking replaced running for a major part of the time, especially during the last 5 hours which was completed in the dark over ankle-threatening tracks.

In all, it was an amazing experience. I think we all enjoyed it, although there were moments of concern with twisted ankles, falls, blisters, temporary exhaustion and near the end, grumpiness fueled by tiredness. The weather was ideal.

Advice to anyone thinking of doing RTTS – give it a go! Get advice from experienced Ultra runners. Try and get a couple of 30 mile runs in. (We benefited from two 15 mile out and 15 mile return runs – one from near the start and one from Avebury. The terrain is totally different.) Lastly, do it with someone or a group and stick together.

We are ERC, so there was no stopping us! 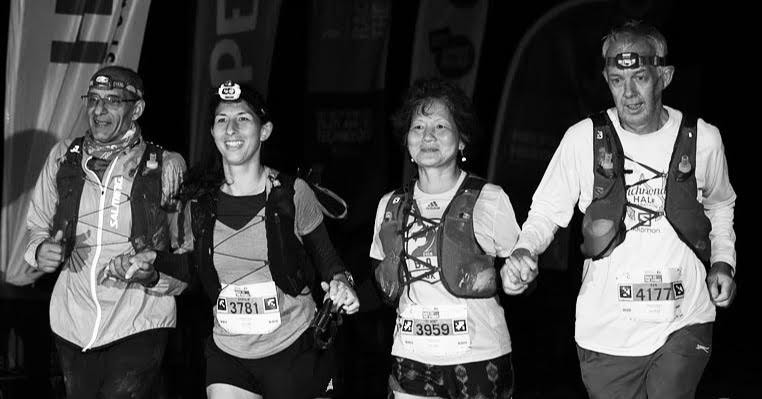