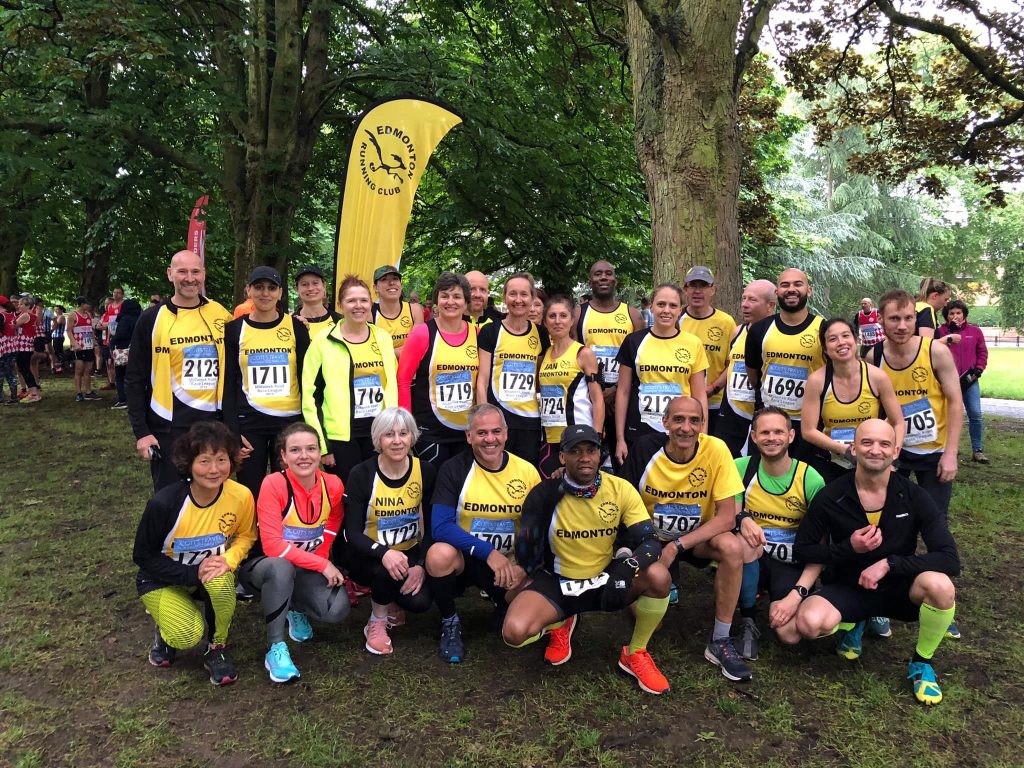 This Wednesday (Jun-12) saw the third edition of the Mid-Week Road Racing League. Only this time the “road racing” was to be taken with a pinch of salt. Either the hosting club (Watford Joggers) did not get the memo or they are just in love with their cross-country course. As a result, the middle section was the same “Loop In The Woods” so familiar to anybody who raced Watford XC Sunday League during the winter. Read “muddy trails and plenty of elevation gain”. The conditions were made a tiny bit spicier by a constant rain during the whole Wednesday and a couple of days prior.

Lesser mortals would have shrunk in the face of such challenge. What about ERC runners then? They turned to the start line in record numbers (14 ladies and 13 men). The photo above is missing Susie and Mark who perhaps took their respective warm-up routines a touch too seriously.

As it is becoming customary in this year league we had a runner who took on the race challenge having joined the club only one day prior. Kudos to Irina!

Chairman Simon while still sadly side-lined by an injury attended the occasion with logistical, official and photographic support.

So – we came, we saw, and we conquered. Very strong showing across the genders and age categories. The notable individual performances came on the ladies side this time with three ERC runners – Katie, Jan and Becky all coming second in their respective age categories.

The herculean effort of the ladies team put them in the SECOND overall position in race 3 in the division after a very strong Ware Joggers team. Still missing a couple of ERC faster runners due to injury the men settled for the fourth place overall. After first three races we are third overall (just below promotional position). Luckily there is still a chance to rectify this at the last point-scoring race in two weeks’ time on Jun-26. I would have said “mark your calendars”, but I suspect that the mark was put there several months ago when the race dates were announced.