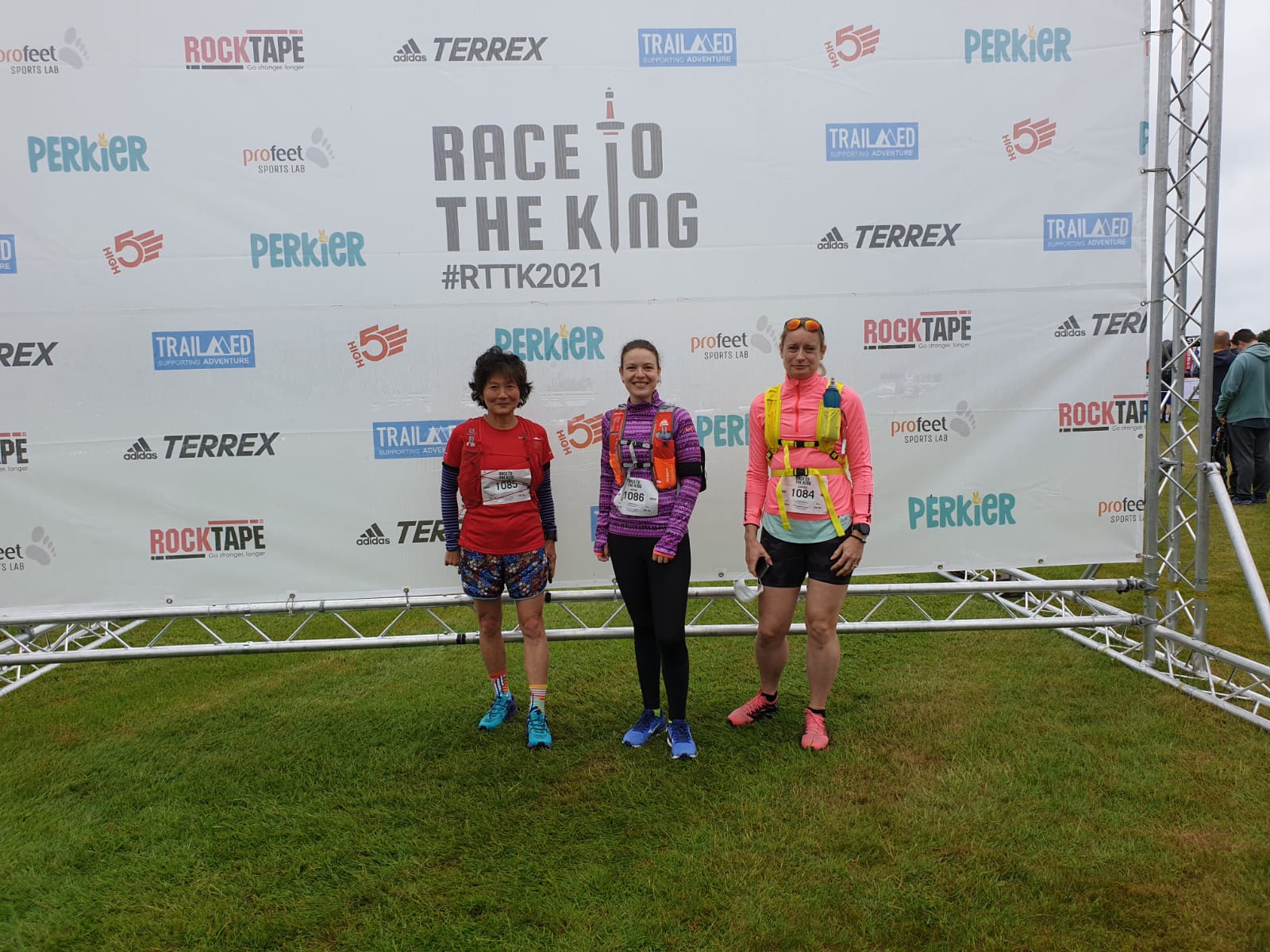 Race to the King – a tale in two parts

For me 2020 was to be a year of firsts, taking on half marathons, then marathons & then an ultra with the Race to the King. The year started well (Big Half, check!) but as with everything else all the best laid plans went out of the window with lockdown. Throw in a recurring knee injury for Dora and family priorities for Sam & our original 2020 RTTK ERC gang shrank down to include two hopelessly optimistic novices & two super women (plus an honorary friend).

Irina & I ran two virtual marathons in 2020, one on the hottest day of the year & one on the wettest, but we hadn’t really thought too much about RTTK. It was only on the hour long coach trip from the finish in Winchester, where we were staying, to the start at Goodwood Race Track that we suddenly realised how far we had to go… if it was taking an hour on the coach…!

Irina did some maths. “I think 19 hours, if we do 11 minute kilometres & don’t spend too much time in the pit stops”.

“Eeeek!”, I thought. Turned out it would take us a little longer.

Because the real reason I hadn’t thought too much about it was because it was just too big a thing to think about. I can barely complete a marathon in 5 hours & 30 minutes, a sub-4 is not something that my legs are built for, would this be any more achievable?

08:00 We met Ai Seng at the start & all set off together, it felt strangely familiar just like a regular race with a civilised start pace. We also adopted our only race strategy right from the start, never run up hill! After a few kilometres we lost Ai Seng in people traffic & waved her off as we saw her red top gradually get further ahead of us until she was finally out of sight.

The first 18 miles were some of the hardest – just getting into a rhythm & adapting to thinking of life as ‘achievable’ stretches between pit stops. I discovered early on why socks that come over ankles are good for trail as every pit stop I had to empty a hundred small stones out of my socks & trainers. Irina’s ankles were also taking a battering on the uneven surfaces. And we both got a mild telling off from the medic at pit stop two for not hydrating enough – I mean it’s a balancing act between hydration & peeing constantly!

Still we had a very pleasant morning chatting away between ourselves and with other runners we happened to befriend for a kilometre or two. It was good running weather, neither too hot nor too cold & with a great sense of shared mission against a background hubbub of all the other runners around us.  Finally, we made it to ‘half-way’ & the main basecamp. For those splitting the distance over 2 days their tents & beer awaited them… for us dinner, then the second half. At this point I feared to stop, this was basically as far as I had ever gone before & I knew how hard it was to stand up again then! But Irina pointed out we needed fuel to keep going & we both remembered the advice Ken had given us the week before, so we made the most of dinner & set off again. 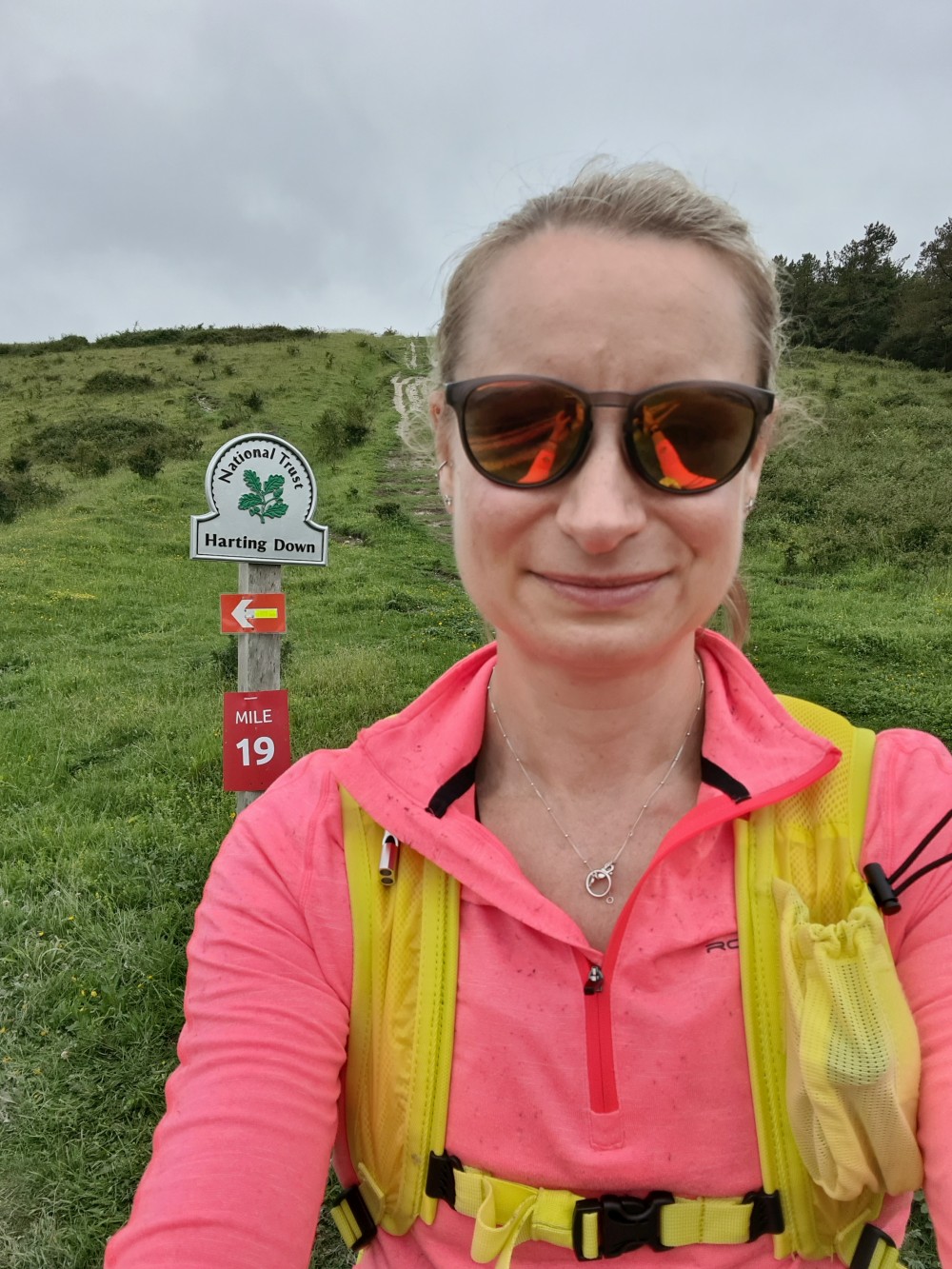 Leaving basecamp, I remember thinking two things: we were now the only two runners we could see, suddenly we were part of a much smaller group the “non-stoppers”, and hooray for new legs! Our next couple of kilometres were some of our fastest. But as we approached pit stop 4 (at 31 miles) we started to slow, Irina’s ankle was causing her increasing trouble and conditions were getting increasingly tough as a downpour had turned trails to mud. At the pit stop we got some tea & Irina checked in with the medics, we decided to continue. On our way to pit stop 5 the sun set, the head torches came out & we discovered the joys of muddy trails in the dark.

Midnight & we limped into pit stop 5 (36.4 miles). The medic here had some stark advice for Irina, her achilles was inflamed, she needed to decide whether risking injury & potentially not being able to take part in London in October was worth finishing. It wasn’t an easy choice for her to make. We’d agreed to stick together, I didn’t want her to not finish, I didn’t want to go on alone, I wanted us both to be crossing the finish line together, but I also want her to succeed in October. So we said a tearful good bye, Irina headed back to the house and I set off into the night, alone. Irina scarified 17 dark night hours to make sure she can enjoy 26.2 October London miles!

I wasn’t alone for long though. You see I learnt another couple of things as I walked on, I could lie & say I ran, but really, I walked the last 17 miles. I learned that terror of being alone, in the middle of nowhere by yourself in the heart of the night can make you walk very fast. I also learnt that hallucinations are common & that it’s possible to sleep while walking.

My first hallucination almost made me stop & turn back. In the middle of the track there was a beautiful fox, he turned & looked at me. Simultaneously I thought “how will I get passed?” and “why are his eyes not reflecting in my torch light?”. As I was pondering how healthy country foxes look compared to London ones he dissolved away & became the muddy puddle he’d always been. The giant crows in the hedges didn’t bother me quite so much after that as I knew they weren’t really there… or at least I hoped they weren’t really there. 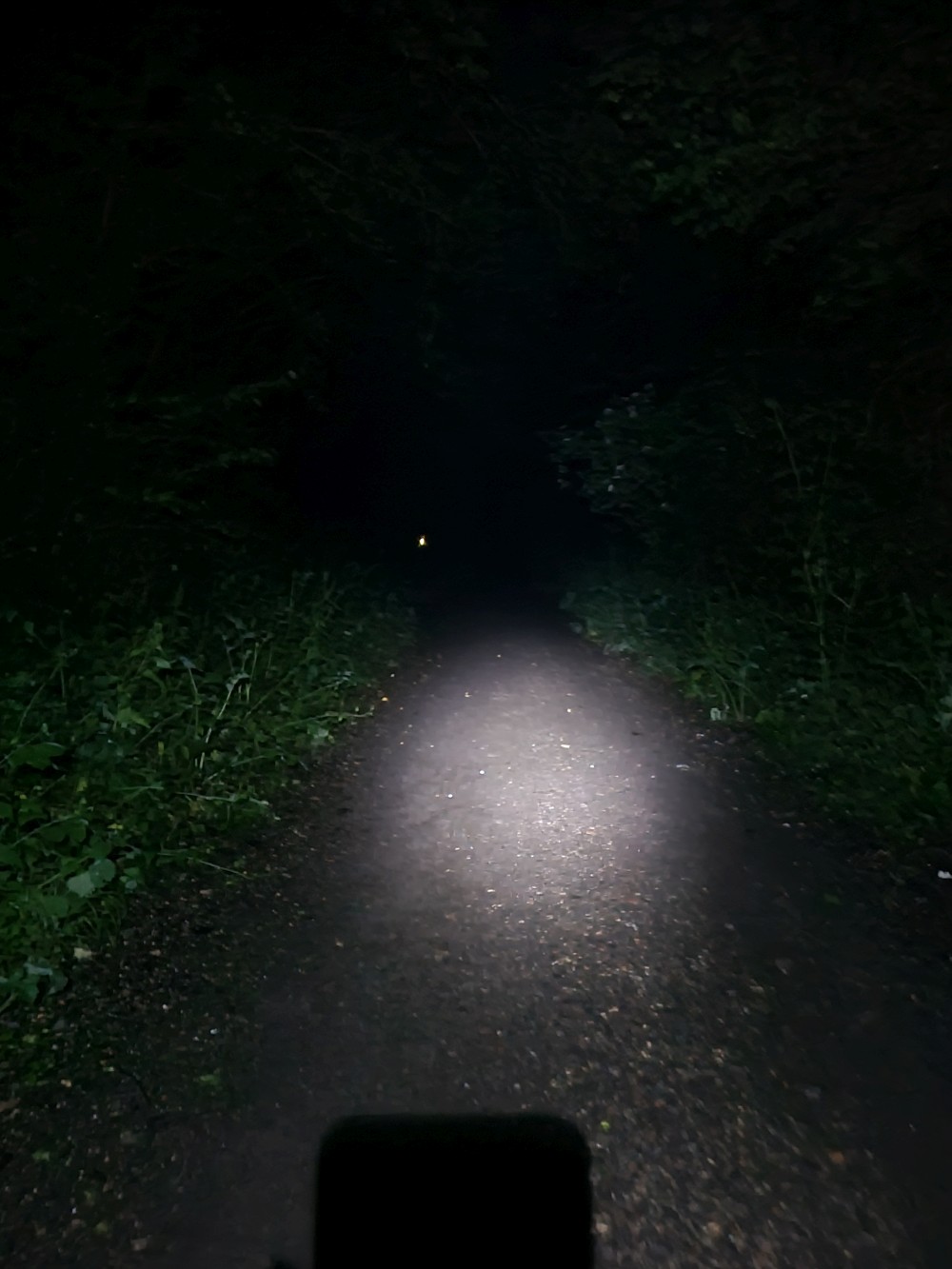 Somewhat ironically the sleeping didn’t start until after dawn had broken & my head torch was stowed away in my bag again. I was about 5 miles out from Winchester, the last pit stop & my last cup of tea was behind me & it wouldn’t be long until I was done with fields & on to the roads of the town. Maybe it was the drop in adrenaline once it was light but more than once I found myself further along the road than should have been possible with that jerking awake feeling usually reserved for the most boring of zoom meetings! 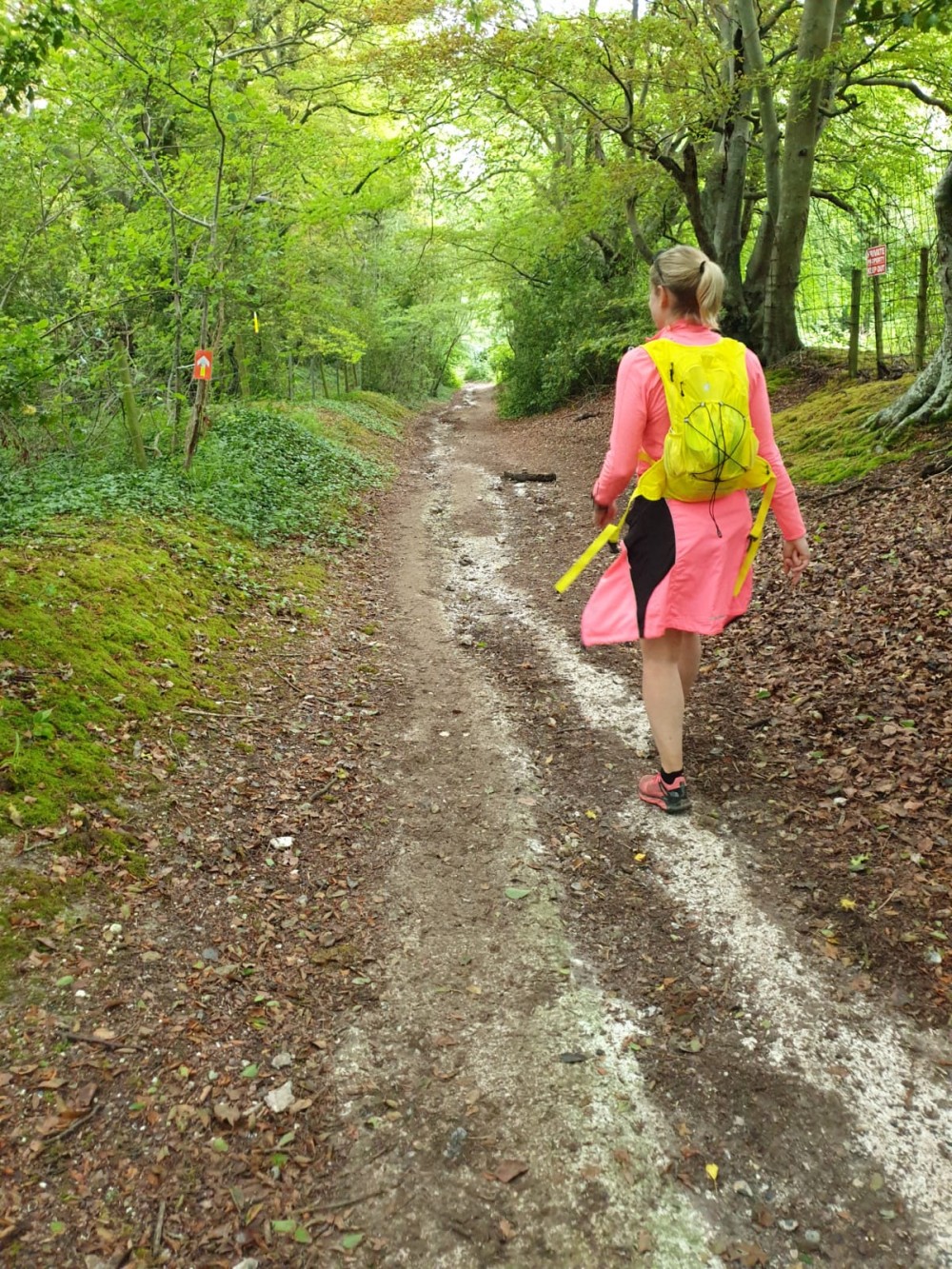 05:30 I finally made it over the start line!  After hallucinating mile markers, I had started to doubt that I really had seen the ½ a mile to go sign but finally there was the finish! The marshals were all there to cheer & greet, while the photographer took pictures – fame for 30 seconds! After 21 hours all I wanted was bed!

Their tale is much shorter, in fact somewhere between 8 & 9 hours shorter! These guys know what they are doing. You see, while walking up hills is an acceptable tactic, apparently you don’t spend time consuming in pit stops you just grab & continue! You also pack extra layers so that in the depth of night you don’t regret the choice of wearing shorts!

But while 3 or 4 hours could have been saved with more efficient pit stopping, there is no denying the superhuman fitness of these guys. There are not enough words; I am completely in awe.

So, would I do it again?