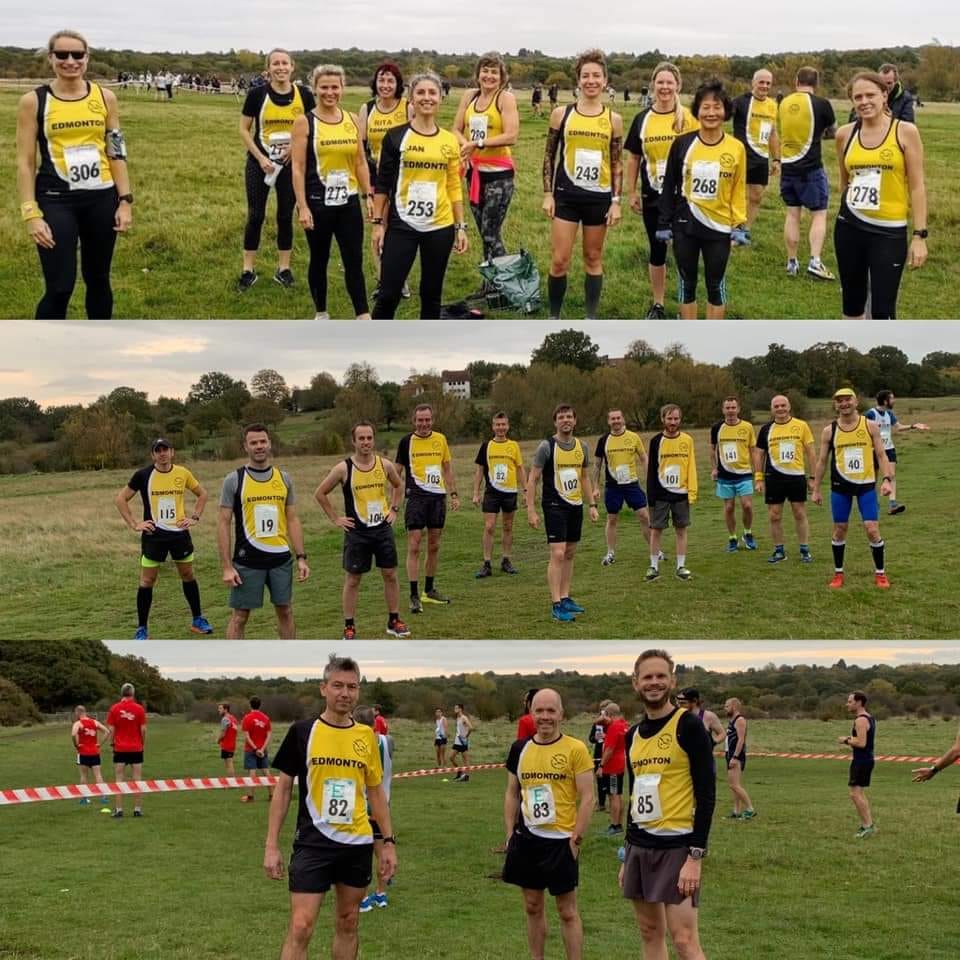 From July onwards the life at the club slowly started to return to some sort of normality. We now have our group runs back. There were some external races to take part in. We even returned to the Donkey Lane track after Naresh brought a battering ram to the gates of Enfield Council. One thing was missing though – the thrill of turning up as a team wearing club vests and battling it out against other clubs. Yes – I am talking about the league races. With most of the league competitions cancelled across the UK the chances of this club activity seemed remote. But Chingford League came to the rescue!

Edmonton RC joined Chingford League only last year, but we got their mixture of XC and road racing to the heart with a number of top performances capped by Ai Seng winning her age group division.

As numerous races were getting cancelled unable to satisfy the social distancing requirements or being rejected by the local authorities, the guys behind Chingford League put an enormous organisational effort and managed to stage a compliant XC race at Chingford Plain. Normally there is no limit on the size of the league team, but under social distancing rules we had to cap the numbers this time. Some clubs chose their teams based on speed. Us - knowing a great appetite for racing in the club we did it on “first signed” basis.

The race day came and the 23-strong team (plus Austen acting as a volunteer) turned up at the (socially distanced and grouped by waves) start.

Seasoned league competitors in ERC know that the XC seasons tend to start in a somewhat gentle fashion easing people into rigors of cross-country racing gradually and then culminating in hilly mud fests in shape of Parliament Hill and Royston. The race on Saturday followed the script with a precious dearth of mud and puddles and the total elevation gain of just 80 metres over the 5 mile two-lapped course. Some runners even opted for road shoes rather than trail ones. What the race lacked in technical difficulty was more than compensated by a sheer competitive grit. Club runners unleashed after the curtailed season raced like their life depended on it and there were numerous lung-busting performances.

Amidst a fine collective effort, it’s difficult to single out individual runs. Still – a couple of personal mentions. There is a long tradition in this club of people throwing themselves into the deep end - turning for a club run on Tuesday and finding themselves on a league race wearing club colours on Wednesday. We did not quite have such a compressed timescale this year, but it was great to see new runners who joined only recently representing the club at Chingford Plain. Namely - Alexandra, Peter and Encho. All three had a storming debuts with Peter coming first of the men ERC squad with a very fast time of 31:01 (20th overall). Rita who lost an awfully long time to an injury and subsequent operation came roaring back as a fastest ERC lady. Ai Seng put a strong marker of repeating her last-year championship feat. She also manages to do what no other runner is capable of – run fast races on gritty courses while smiling all the way from start to finish.

It was great to see that after the finish ERC runners confirmed the club supportive reputation by staying along the home straight (in a socially distanced fashion) and supporting their clubmates on course.

The league organisers have not yet produced the club points standing, but we already have the individual times:

The next Chingford League race is scheduled for Nov-21. The details are TBC at the moment – please follow the club communications for updates.