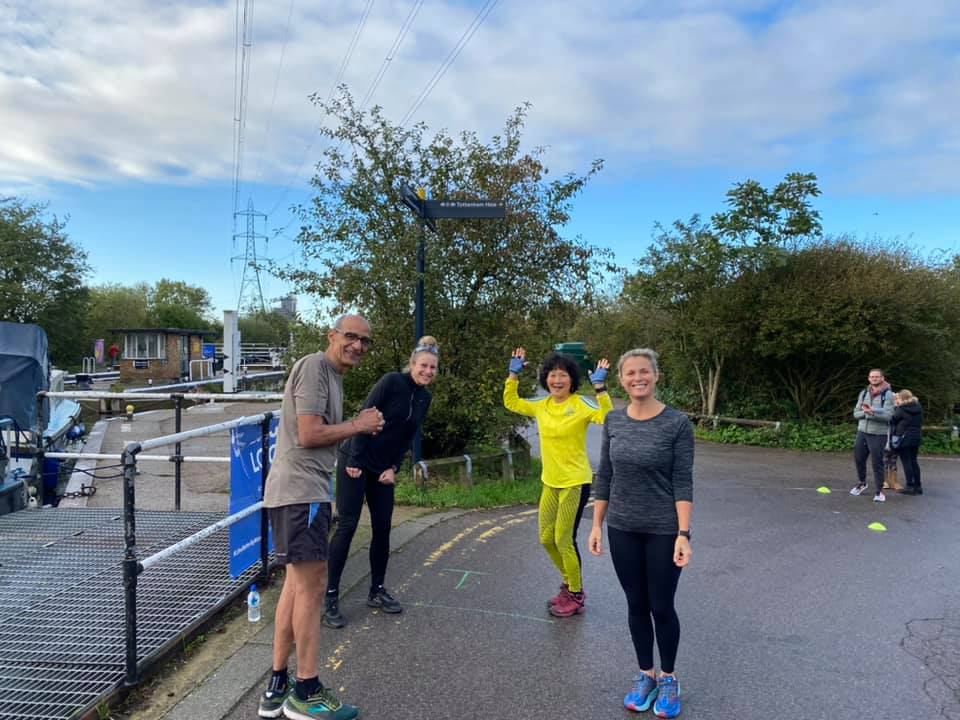 It’s an understatement to say 2020 has been a strange year. The racing calendar has been hit hard by the pandemic and uncertainty continues to surround many of our plans. The ERC committee had been forced to take the decision to cancel our own beloved Run the River (RTR) back in late July. This proved to be the correct decision as managing an event with 250+ runners and 60+ volunteers could simply not have proceeded safely under the current circumstances.

ERC runners are however a resilient and hardy bunch, and we could not let the occasion of the cancelled RTR go without paying a small tribute to our favourite 10k. After the inclement weather conditions of the last two years, this morning (Not)Run the River was blessed with beautiful Autumnal sunshine and a relatively mild temperature. There was a real buzz of anticipation as the group assembled at Stonebridge Lock. Runners were split into Groups of four and ‘put in their boxes’, not figuratively speaking – but actually into 6 chalk boxes drawn on the ground to help promote social distancing (sorry if you thought I was being rude). Everyone was ‘sort of’ in position, and we were just set for the run briefing, when the Police arrive with blue lights flashing! Were they checking up on our Covid-19 compliance measure? Or looking for unsavoury types lurking round the lock? or simply after a Bacon Butty from the Café? Who knows? We were somewhat relieved that they set off in the direction of Tottenham Marshes; so we thought we better quickly get the runners on their way. “Nothing to see here Officer”. The Runners were called forward in their groups and set-off at 1 minute intervals to avoid congestion, in the same format at the St Albans and Lee Valley Run Fest events held recently as Gareth kindly pointed out. N.B - they copied me ;)

Whilst Run the River is our ‘home’ 10k, most ERC runners have never actually had the opportunity to run the course as they are asked to volunteer. It’s actually quite a tricky route to follow especially when you pass from tow path to marsh and back again, over various bridges – it all can be quite disorientating. Especially if you are the speedy lead runner. Enter Dom Wilde. I feel so bad for Dom, who had made a storming start and was at full race pace, only to take a wrong turning heading over the chalk bridge instead of carrying on North up to Pickett’s Lock. I suspected something might be up when I received a phone call from Dani, 17 minutes after the start telling me that Dom had just entered the mini loop in the South Marshes and had 1km to go. Joshua Cheptegei broke the men’s 10km world record last week in an astonishing time of 26:11, and here was Dom about to obliterate that in (Not)Run the River in Tottenham Marshes. Fair play to Dom though…he showed true ERC grit and determination and continued on an adapted route (“Dom the River?”) and completed the 10k in a stellar time of 43:25. Undoubtedly he would have gone even quicker without this confusion and also stopping with me for a chat!

There were so many other notable performance/runs to mention. I’ll just pick a few to mention here…

· A very close run between Mike Babb and Encho Pramatarov, the latter telling me at the end that he had to hang back as Mike charged straight through all the puddles, and he didn’t want to get wet or splattered with mud. Encho your trainers were still spotless at the end so this strategy clearly worked for you. Great running both!

· Rita Moran and Jan Hazirci tearing up the course, overtaking everyone in the group ahead of them and then both sprinting for the finish. Jan was so delighted to finally receive an official RTR medal – I hope it takes pride of place on the medal rack Jan!

· A stunning PB for Hannah Nice who keeps on getting quicker. Well done Hannah – a great performance on a challenging course, and the car and pontoon definitely cost you more than 7 seconds!

· A storming run from Dee, overtaking the field ahead of her. Lovely to see you back running with us.

· Lovely to see Rebecca Napolitano-Cremin’s family supporting her this morning and a big cheer as she crossed the line.

It was an incredibly enjoyable morning, only made possible by the volunteers so big thank you to Dani, Catherine, Richard, Austen and my daughters Nia and Orla for helping. Also thank you to John Churchill for coming down to help-out – sorry that in the chaos I didn’t direct you to a good location to marshal – I should have asked you to head to the Chalk Bridge to direct Dom! Thanks also to Jan for the amazing carrot cake which was very well received by all the runners. It really helped to round off a memorable morning.

Hopefully next year we’ll be able to stage Run the River properly, but also based on feedback (Not)Run the River could also return to give ERC runners the opportunity to run our challenging course and to enjoy good cake and company afterwards. Perhaps next year though we’ll have a lead bike. Here’s to 2021!